The story about the Prince Pipo, horse Pipo and Princess Popi

Once upon a time, there was a very rich, very good and powerful king, who lived in his kingdom. He was also very sad, because he didn’t have a son.

One day, he decided to go to the Country-to which-you-can-go-only-in a dream, to look for help from the Great Enchantress  from the End of the Waters. When he gets there, in the huge cave full of a little children, he meet an extraordinary boy named Pipo, who agreed to become his son. Together with the Prince, the happiness has been brought to the kingdom.

On the 15th birthday, the Prince received as a gift a small red horse. Pipo gave the horse the same name as he had, and soon they become the best friends. One day, when Prince Pipo and his horse Pipo set off to one of their many rides, they got imprisoned in a strange grey world at the other side of the volcano. They decided to find out the way how to free themselves from this strange land, which they didn't like at all. How does their way back home looks like, who do they meet and if they manage finally to get back home - the story from the borderland of the real world and a dream tells about it.

The performance tells about growing-ups and obstacles which has to be surmount on the way to the proper adulthood. It also tells that our fate is not prejudiced and the story of our lives is the most extraordinary, unique and the most beautiful fairy that we are writing by ourselves. 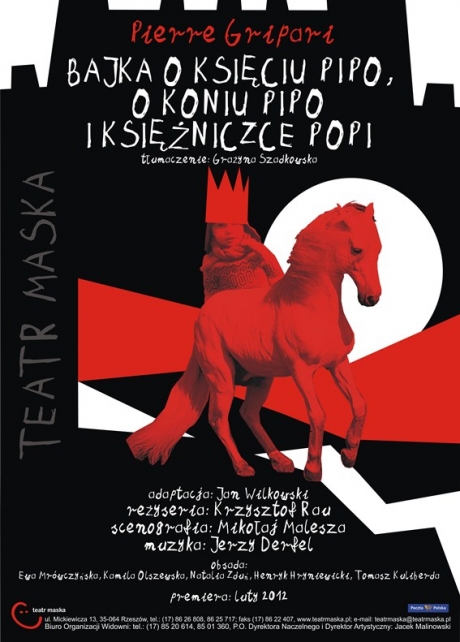