Stage for Youth and Adults

Two households, both alike in dignity,
In fair Verona, where we lay our scene,
From ancient grudge break to new mutiny,
Where civil blood makes civil hands unclean.
From forth the fatal loins of these two foes
A pair of star-cross'd lovers take their life;
Whole misadventured piteous overthrows
Do with their death bury their parents' strife.
The fearful passage of their death-mark'd love,
And the continuance of their parents' rage,
Which, but their children's end, nought could remove,
Is now the two hours' traffic of our stage;
The which if you with patient ears attend,
What here shall miss, our toil shall strive to mend.
(William Shakespeare "Romeo and Juliet", prologue)

„Romeo and Juliet” is one of William Shakespeare’s most famous and most frequently performed plays, adapted numerous times for stage, film, musical, and opera venues. Practically-everybody-knows tragic story of young lovers from Verona. Story of overwhelming,  sudden and unexpecting love – the kind that leave no choice or possibility of retreat. But what makes this story so unique? Why it is still so inspiring for different artist after many centuries? This is the story about five days, which had changed everything, ultimately sealed main characters fate, and made their names a synonym of doomed love. Yes it is only five day between “you don’t exist in my world” and “without you my world don’t exist. And this is what makes this tragedy so phenomenal – not sole legendary teenagers love, but its instant vehemence in unbelievable acceleration. Equal vehement are feuding families hatred and death. Where does this phenomenal force came from? Are Romeo and Juliet only a supernumerary in Theatrum mundi performance? Are they only a playthings of cruel and malignant fate?

Our performance is a new interpretation of Shakespeare's most popular play. Some characters were relegated to background, other – usually hidden in the shadows – take place in stage lighting. The stage from the very beginning belongs to Queen Mab – queen of the fairies originated from Celtic tradition, She is like a child – kind but also mischief and cruel. Her dance could be seen as capricious arabesques and pirouettes of fate… Equally important role has Friar Laurence – human nature researcher and dedicated believer in a truth of theatre. This is performance about short and tragic story of Romeo and Juliet but also about meaningfulness of the theatre dealing with memory and transformation of human destinies in this strange kind of beauty, which not diminish its tragedy and not increase its sublimeness and which leave ordinary things their surprising nonobviousness. 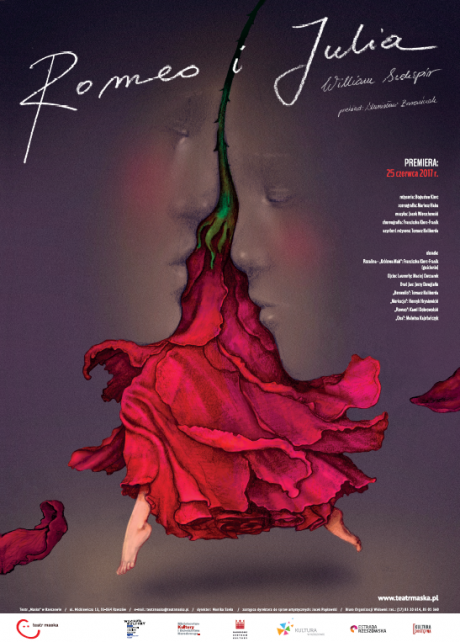